This post will take a look over some of the useful commands for troubleshooting performance using ESXTOP. To access esxtop open a connection to your host using the ESXi shell. This can be done with an SSH client, such as putty, using port 22 and your root login details. For more information on enabling and accessing the ESXi Shell see Using the ESXi Shell.

Once you are logged into the command line interface simply type ‘esxtop’ and hit enter. Within the esxtop screen we can use different keys to change the view and examine certain metrics such as CPU ‘c’, memory ‘m’, network ‘n’, disk ‘d’. We will look at the main parameters below for troubleshooting performance issues on an ESXi host.

At any time you can press space to update the display (although this refreshes automatically every 5 seconds) ‘q’ to quit and ‘h’ for help. Add or remove new fields using ‘f’ and if you want to save this configuration for next time type an upper-case ‘W‘.

The second point we need to understand is that esxtop uses worlds to show CPU usage. A world is a VMkernel schedulable entity, similar to a processes or thread in other operating systems. You will see references to both the CPU scheduler and VM worlds in the explanations below.

Once in the esxtop screen press ‘c’ to display CPU statistics.

%USED amount of time spent executing CPU core cycles by the virtual machine. A substantially higher value on one virtual machine compared with others could mean it is the cause of performance issues on the host.

%SYS shows the percentage of time spent performing system activities on behalf of the world. A value of 10% to 20% or higher could be a symptom of a high IO virtual machine.

%CSTP is a value for virtual machines with multiple vCPUs, and shows the time spent waiting for one or more of those virtual CPUs to become ready. If this is above 3% it generally means the number of vCPUs should be decreased.

%MLMTD percentage of time a ready to run vCPU was not scheduled due to a CPU limit setting. If this value is above 0 then the limit should be removed to improve performance.

%SWPWT relates to the time spent waiting for swapped pages to be read from disk. If the value exceeds 5 you could potentially have an issue with memory over-commitment.

Once in the esxtop screen press ‘m’ to display memory statistics.

At the top of the screen you will see PMEB /MB. These values are in MB and list the total memory of the host (total) memory used by the ESXi VMKernel (VMK) other memory in use (other) and free memory (free). 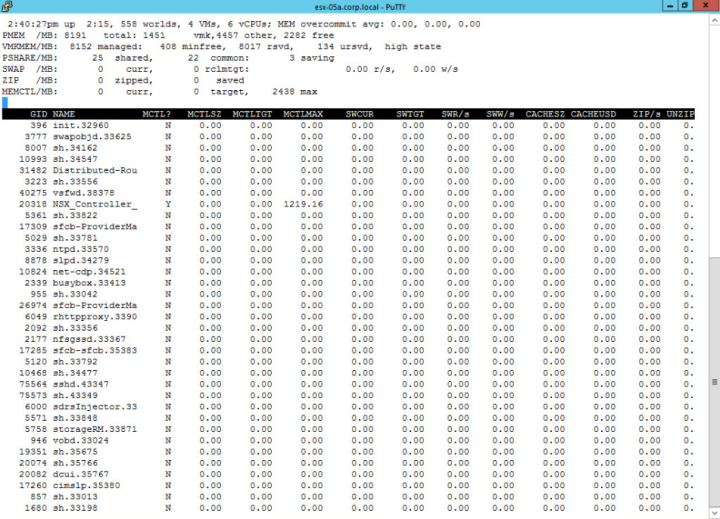 Other useful columns are listed below, mainly these relate to over-commitment of physical memory.

MEM overcommit avg shows the average memory overcommit for the last 1, 5 and 15 minutes.

MCTLSZ amount of guest physical memory in MB that the ESXi host is reclaiming by inflating the balloon driver. This occurs when the host is over committed and does not have enough available physical memory.

SWCUR amount of memory in MB swapped by the VMKernel, again any value over 0 is another symptom of memory over-commitment.

SWR/s and SWW/s shows the rate at which the host is reading or writing to swapped memory, once again any value over 0 indicates possible memory over-commitment.

CACHEUSD shows the amount of memory in MB that has been compressed by the ESXi host. Compression occurs when the host is over-committed on memory so this should not be above 0.

ZIP/s and UNZIP/s indicates the host is actively compressing memory and accessing compressed memory respectively. Values larger than 0 imply the host is over-committed on memory.

Once in the esxtop screen press ‘n’ to display network statistics.

For network you can look at the %DRPTX and %DRPRX columns. These represent the dropped packets transmitted and dropped packets received respectively. Values above 0 here could signify high network utilisation.

The USED-BY and TEAM-PNIC columns display a list of the virtual machines on the host and the vmnic that it is using.

Outside of esxtop, but also useful, back at the command line use ‘esxcli network nic list’ to list the available network adapters. To see the stats such as packets/bytes transmitted/received and dropped enter ‘esxcli network nic stats get –n vmnic0’ changing the vmnic as appropriate. 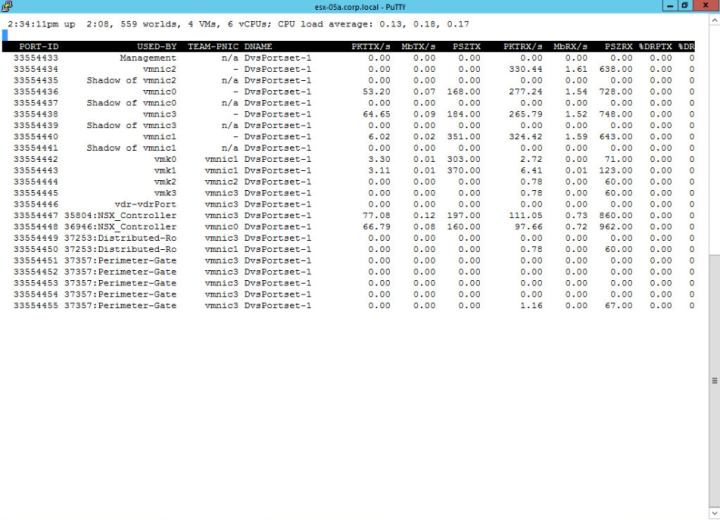 These are just some parts of esxtop I have found useful, it goes much deeper with more commands and syntax here: https://communities.vmware.com/docs/DOC-9279.

One thought on “Troubleshooting with ESXTOP”