This post demonstrates the connectivity between VMware Cloud (VMC) on AWS and native AWS services. In the example below we will be using Amazon Elastic Compute Cloud (EC2) to provision a virtual instance backed by Amazon Elastic Block Store (EBS) storage. To complete the use case we will install Veeam and use the EC2 instance to backup virtual machines hosted in the VMware Cloud Software-Defined Data Centre (SDDC). Further Reading: How to Deploy and Configure VMware Cloud on AWS (Part 1), How to Migrate VMware Virtual Machines to VMware Cloud on AWS (Part 2). 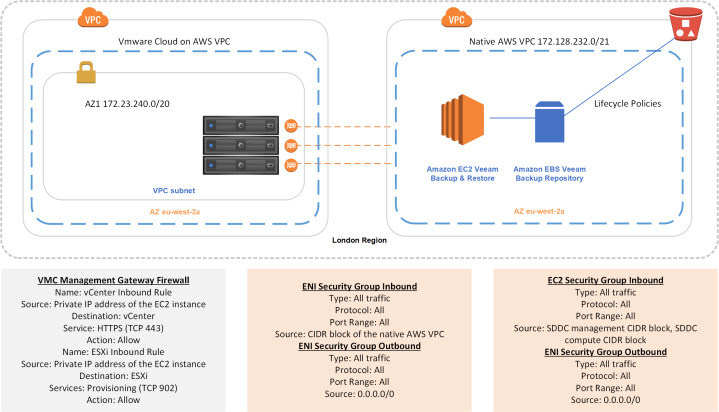 In the AWS console Security Groups can be accessed from the EC2 service. In this example I have created a security group allowing all protocols (any port) inbound from the source CIDR block used in VMC for both my compute and management subnets. In other words this is allowing connectivity into the EC2 instance from VM in my VMC SDDC. You may want to lock this down to specific IP addresses or ports to provide a more secure operating model. Outbound access from the EC2 instance is defined as any IPv4 destination (0.0.0.0/0) on any port.

Log into the VMware on AWS Console, from the SDDCs tab locate the appropriate SDDC and click View Details. Select the Networking & Security tab. Under System click Connected VPC. Make a note of the AWS Account ID and the VPC ID. You will need to deploy an EC2 instance into this account and VPC.

Log into the AWS Console and navigate to the EC2 service. Launch an EC2 instance that meets the System Requirements for Veeam. In this example I have used the t2.medium instance and Microsoft Windows Server 2019 Base AMI. When configuring network the EC2 instance must be in the VPC connected to VMC. I have added an additional EBS volume for the backup repository using volume type General Purpose SSD (gp2). Ensure the security group selected or created allows the relevant access.

In addition to security group settings inbound access also needs allowing on the VMC Gateway Firewall. In this instance as we are connecting the EC2 instance to the vCenter we define the rule on the Management Gateway. If we were connecting to a workload in one of the compute subnets the rule would be defined on the Compute Gateway. You may have noticed that although I allowed any port in the AWS Security Groups, the actual ports allowed can also be defined on the Gateway Firewall.

In this example I have added a new user defined group which contains the private IPv4 address for the EC2 instance and added it as a source in the vCenter Inbound Rule. The allowed port is set to HTTPS (TCP 443) – I have also allowed ICMP. I have added the same source group to the ESXi Inbound Rule which allows Provisioning (TCP 902). Both these rules are needed to allow Veeam to backup virtual machines in VMC.

In the VMC console navigate to the Settings tab of the SDDC and make a note of the  password for the cloudadmin@vmc.local account. Open the Veeam Backup & Replication console and add the vCenter private IP address, use the vCenter cloud admin credentials.

Add the backup repository using the EBS volume and create a backup job as normal. Refer to the Veeam Backup Guide if you need assistance with Veeam.

To make use of S3 object storage AWS you will need an IAM Role granting S3 access, and an S3 VPC Endpoint. In the case of VMC, as an alternative design, you can host the Veeam B&R server inside your VMC SDDC to make use of the built in S3 endpoint. In testing we found backup speeds to be faster but you will likely still need an EBS backed EC2 instance for your backup repository. It goes without saying you should make sure backup data is not held solely on the same physical site as the servers you are backing up. See Veeam KB2414: VMware Cloud on AWS Support for further details.

Set an appropriate policy for moving backups to object based storage, once this threshold is met you will start to see Veeam files populating the S3 bucket.